You are here: Home » News » How to choose Capacitive Membrane Switches

How to choose Capacitive Membrane Switches

l  What is the structure of the capacitive film switch?

l  What are the advantages of capacitive film switches? 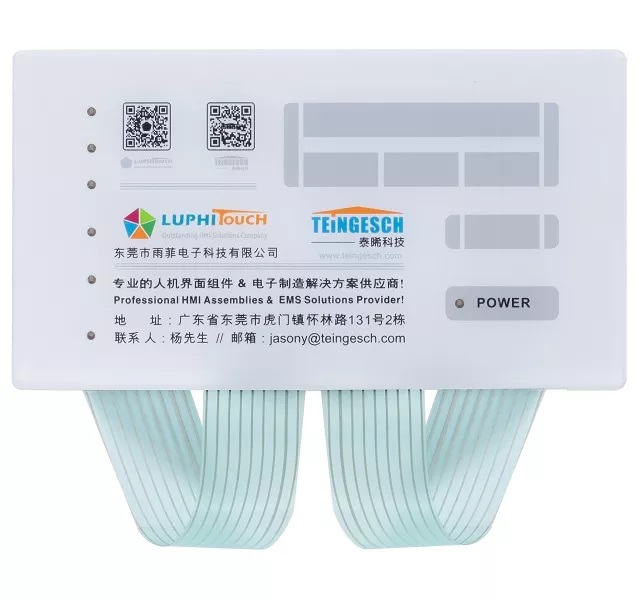 What is the structure of the capacitive film switch?

capacitive switches typically require three layers to function. Graphic overlay, circuit layer and substrate material. The graphic covering layer may be any non-conductive material of different thickness, including; Glass, polyester, polycarbonate, acrylic materials and many other non-conductive materials. The circuit layer can be a thin plastic bending circuit, or a sensing pad arranged on a rigid PCB. The backing material can be metal backing board, glass, plastic, or glued to a part of the product. It is also possible to attach a flexible circuit to the inside of the sealed container to protect the electronics in harsh environments. Capacitive switch structures can be more complex, depending on backlight selection or shielding requirements.

What are the advantages of capacitive film switches?

How to select capacitive film switch?

1. Good appearance: The surface of the film made of the panel is smooth and consistent, without mechanical damage, scratches, inclusions, stains and other surface defects.

2. Membrane switches have better chemical resistance: The panel layer may be exposed to different chemicals, but should have some resistance to most common chemicals such as alcohols, ethers, mineral oils, etc.

3. Membrane switch weather resistance is good: the panel layer is the surface layer of the membrane panel exposed to the natural environment, the panel material must be able to withstand certain natural environmental conditions without deformation, cracking, aging, discoloration.

5. Elastic requirements: the panel layer is required to have a certain resilience. At the same time, the elastic deformation of the membrane plate is small, which can be judged by the

elongation of the material. Generally speaking, if the elongation is large, the elastic deformation is also large, and the resilience is poor.

If you are looking for a good quality and reasonable price of Capacitive Membrane Switches, LuphiTouch can provide you with the best